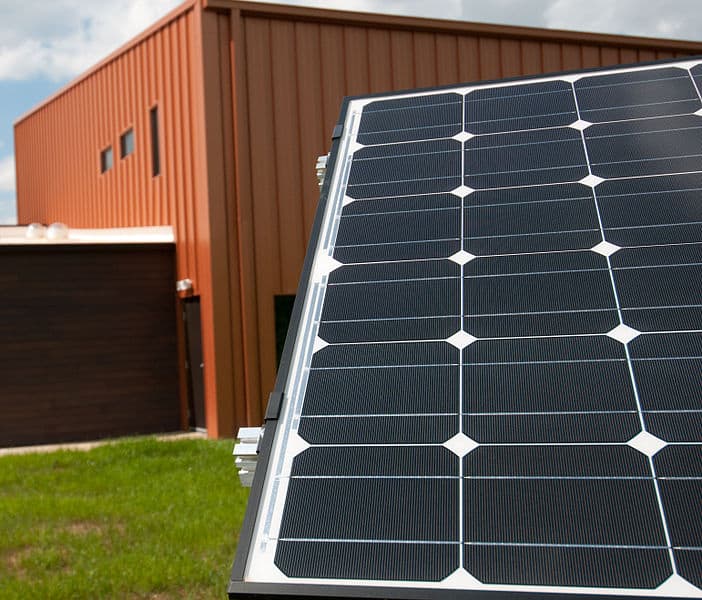 Can metal buildings work with rooftop solar energy systems? Yes, they absolutely can! Our clients who want to equip their MBMI metal building with solar voltaic panels, solar thermal systems or solar walls just need to supply our engineers with information on system at the beginning of the design process. We can design the structure to support any type of solar system at very little or no added cost.

What kind of system might be best? When most people think about solar power systems, they think of solar voltaic panels that generate electricity. However, solar thermal systems are, in many cases, an even better choice. Finally, there are solar systems that use hot air to provide heating, like solar walls. They can also work well with metal buildings.

Solar voltaic systems consist of arrays of solar panels that generate electricity. For rooftop use, these may be regular solar panels on the roof’s surface or solar shingles.

Many people think that solar voltaic systems feed electricity to the building, require batteries, and complicate the building’s electrical system. It’s true that solar panels can be used to directly power an off-grid building. However, most rooftop solar panels actually feed power into the local electricity distribution grid, and the power company pays the owners of the panels for the energy.

What this usually translates into for the building owner is a discounted electrical bill.

There are two types of solar thermal systems. One simply involves using a high efficiency pump to pass water through tubes on the roof. The other type is more advanced and efficient. It uses a vacuum tube-based system and a heat exchanger. Both are governed by a set of thermostats and a controller. They switch on when the roof is hot and the water in the boiler, water heater or pool is cooler.

Solar thermal systems sound simple, they require powered pumps, and many people wonder how useful they are. The fact is, they are highly efficient and very useful. They almost always provide more energy savings than a solar voltaic system. After doing the research and running the numbers, most people find that solar thermal systems have a shorter payback period than solar voltaic systems.

Finally, there’s the type of system that uses solar energy to heat the air: solar walls. Like water-based solar thermal systems, solar walls can help to boost a heating system. However, rather than working with boilers and radiators, they work with furnaces and ducts. They’re usually installed on a south-facing wall, and they absorb the heat from solar radiation, use it to warm a column of air, and allow the air to rise up to a rooftop HVAC unit for distribution. Like solar voltaic and solar thermal systems, a solar wall (or solar roof) can easily be coordinated with standard building systems.

When it comes to the cost-effectiveness of these types of systems, government incentives can play a huge role. Check the EPA website and your state and local websites for information on feed-in tariffs for solar voltaic systems and grants and discounts for solar heating systems.